If you’re ever out of birthday cake ideas, why not bake one your own? At Funsiamo, you choose your preferred cake, turn up at your reserved time slot, marvel at how everything has been prepared nicely for you, and bake away! 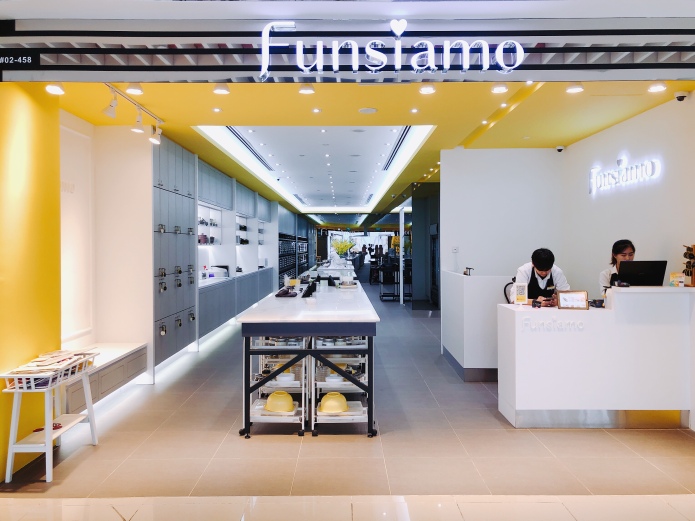 When I visited on a weekday afternoon it was empty so I had the whole place as well as the staff’s attention to myself.

The interior is bright, clean and neat. The working stations are on one end of the studio while the mixers and ovens are on the other end. You can leave your belongings in the lockers provided. Remember to take your phone because you’ll be taking pictures throughout the session.

Depending on your selection, the staff would have prepared all necessary tools and ingredients before your arrival. For example, if the recipe calls for just egg yolks, you’ll find separated yolks in their fridge. No fuss about separating them on your own and making a mess out of it.

Before starting work, you’ll first have to watch a video of how the cake is made. The video is customised by Funsiamo, so everything you see in the video is similar to what you’ll experience later on.

Detailed, step by step instructions (including which tools you’ll need at which stages) are all available so it’s really quite foolproof. 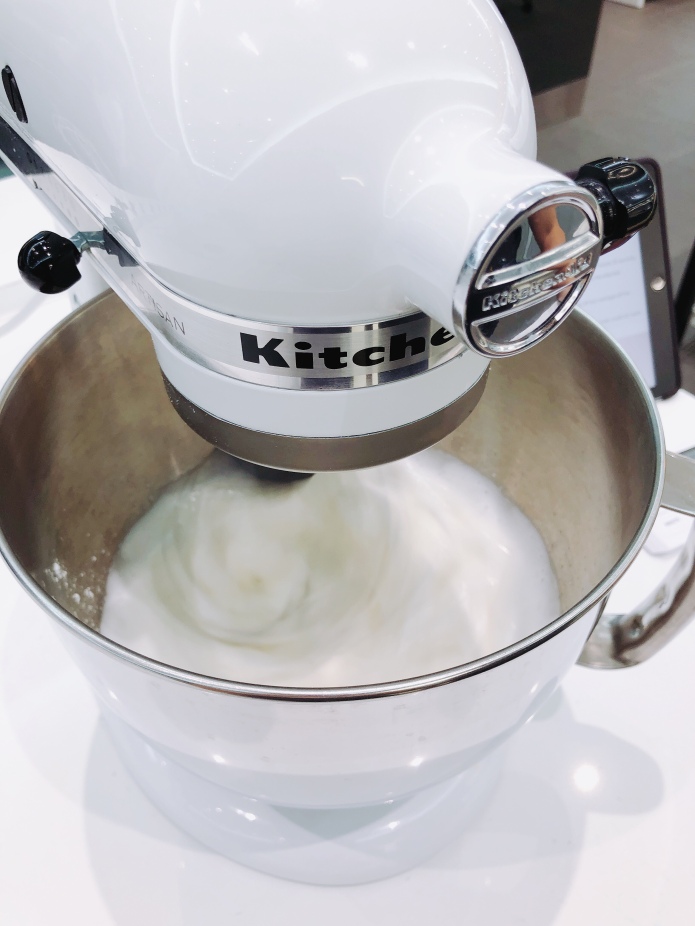 If you have baked before, you’ll know how difficult it is to get the soft peaks/ hard peaks correct. Here at Funsiamo, the staff generally lets you do your own mojo, but at critical junctures like this they’ll be there to assist. I got the perfect egg white texture with their help. 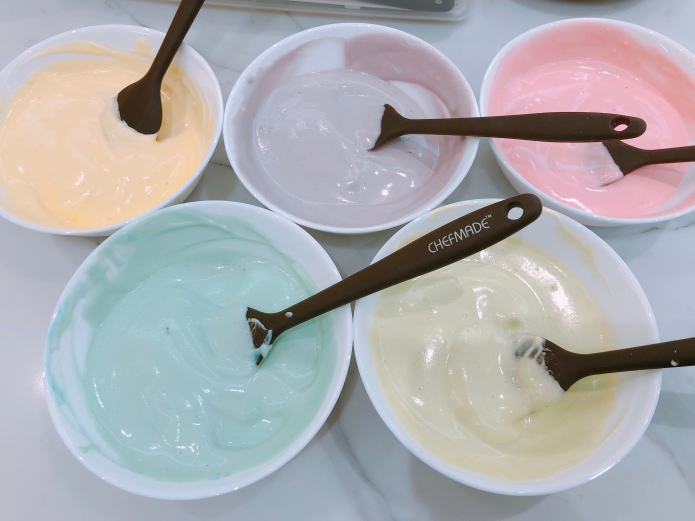 My unicorn cake is actually a rainbow cake within! Pretty excited at this point to see how it’ll turn out in the end.

Letting the cakes cool down.

The baking process was fuss free. I think I was too easy on the colouring here, couldn’t really tell which was what colour till I took them out of their trays.

Preparing the buttercream for the unicorn mane.

While the buttercream was already provided (i.e., you don’t do it from scratch), you have to colour the buttercream separately before combining them into one huge tube. By the way, do you see those three little squeeze bottles at the back? Those were used to draw the eyes and ears! 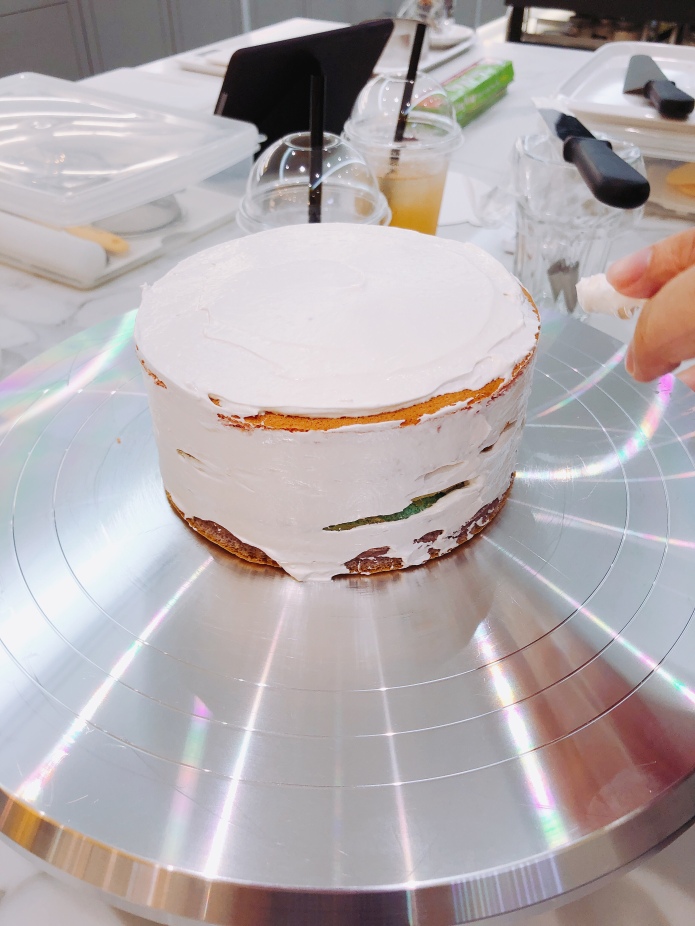 Stacking the cakes together.

After stacking the coloured cakes on top of each other (haha they even instruct you which colours to stack first so you get that nice contrast in between the colours), you can slap on the soft cream and freeze your cake in the blast chiller before decorating. 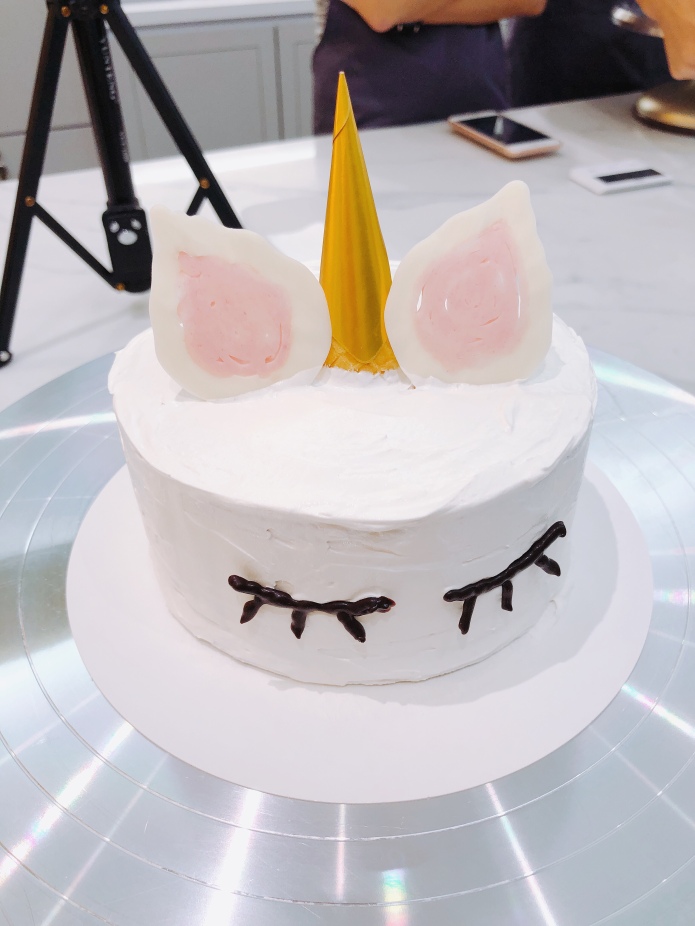 Stuck on the eyes and ears.

Piping the buttercream twirl by twirl. This was so much fun. 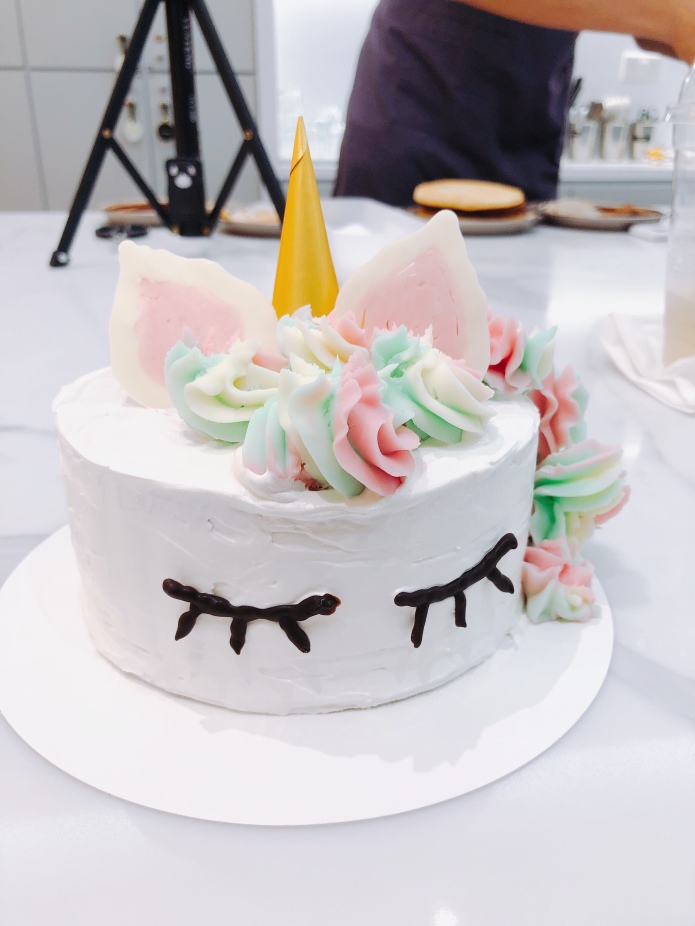 The end product! Love how this cake turned out.

Cake, box with ribbon and a fitted paper bag.

Funsiamo has got you covered till the very end. They would pack your cake into a box with an ice pack so you have enough time to travel home without the cake melting. If you prefer to shop around or have your meal in Suntec before leaving, do let them know as they will let you to store your cake with them if there’s enough space.

Had a pleasant surprise after cutting the cake. The colours were so pretty! Taste wise, it wasn’t too sweet as well. Not a single piece of cake was left that day.

My experience at Funsiamo was great for several reasons. At Funsiamo, you don’t have to wash anything except your hands! You know how many bowls you will use in baking? Every ingredient one bowl, 10 ingredients 10 bowls. The staff will also constantly clear your workspace for you so that you have more space to do your stuff.

What stood out for me was the staff’s attentiveness. You don’t get the feeling that someone is eyeballing you yet at the same time the staff will appear when you need help. For instance, I was super nervous when piping the mane because I was afraid that I’ll screw it up. In this split second a staff showed up and helped me to pipe the first one!