The Strawberry Watermelon Cake from Black Star Pastry is my all time favourite cake. I tried it once when they came to Singapore for The Great Food Festival in 2017 and it has been on my mind ever since. On and off I would have cravings for it, but never quite knew where to get them in tiny little Singapore.

So I decided to bake one myself. 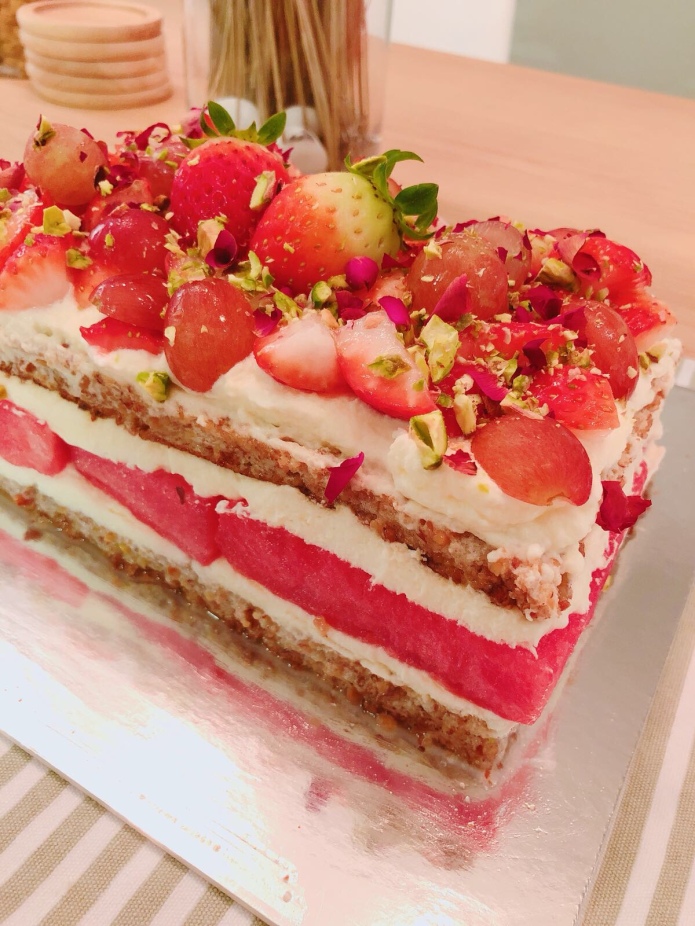 The results blew my mind. Pretty decent for a first timer, and helluva impressive. Thought I should share the recipe with some tips so that you guys can make one yourself too!

For the almond dacquoise:

For the rose-scented cream:

I wish you fun and may your cake turn out great. Happy baking!

Tiramisu is no stranger to the masses. A good tiramisu […]
Carolynmisu – Classic Homemade Tiramisu Made Using Cooked Eggs

Ovenly Bytes – Bakes that Melt in Your Mouth

Go!!! The Edge lunch buffets have always been one of my favourite buffets because of their sheer variety and good quality dishes. Pre-Covid-19, the place itself was a feast for […]
Edge Saturday Lunch Buffet, Pan Pacific Hotel

Buy! Do you know the difference between ice cream, sherbet, […]
Trippy Sherbet – Handcrafted Sherbets with No Added Preservatives

Worth a try. Yakiniku Like has got a great reputation in Japan for being a convenient and affordable yakiniku eatery. Think of it as a fast-food eatery, but for yakiniku. […]
Yakiniku Like, PLQ Mall

OraSi — a healthy and sustainable alternative to dairy milk

Shoutout to all my lactose intolerant readers out there! Coming […]
OraSi — a healthy and sustainable alternative to dairy milk

Worth a try. Gochi-So Shokudo stands out as a Japanese restaurant specialising in Iberico pork dishes (Iberico is like the wagyu of cows, but pork version). Its popularity grew quickly […]
Gochi-So Shokudo, Jewel Changi Singapore
Loading Comments...
%d bloggers like this: