Straits Cafe at Hotel Rendezvous is no stranger to the fellow Singaporean. It’s buffets are well known for its selection of peranakan food and durian desserts. I visited them a few years back and left with a good impression, so when my friends jio-ed me for a weekday buffet dinner, I immediately agreed.

All stations in Straits Cafe buffet are rather small and limited, but thankfully the quality makes up for it.

Cold station. They’ve got oysters! The crabs were really fresh as well – Whole, large chunks of meat coming off after the shell is cracked. As for sashimi, they didn’t have salmon belly, which was a little disappointing.

Assortment of cooked food which had more hits than misses. The chilli crayfish meat was tough although the sauce was good.

Apparently, they claim their laksa to be award winning. Well award winning or not, the laksa was fantastic. I had two servings of this.

Beef hor fun. The hor fun had the wok hei taste which was pleasantly surprising. However, they precooked everything and only topped the sticky gravy over the hor fun upon order, so the dish wasn’t hot till shiok kind.

Make your own Kueh Pie-Ti. They didn’t have the sweet sauce which I thought was crucial to the dish!

Make your own Rojak. This was pretty good, except that the you tiao was a bit too dry and hard. I personally prefer the moist yet crunchy type.

Dessert station. Durian desserts are definitely the star of the buffet. The rest of the desserts were ordinary. 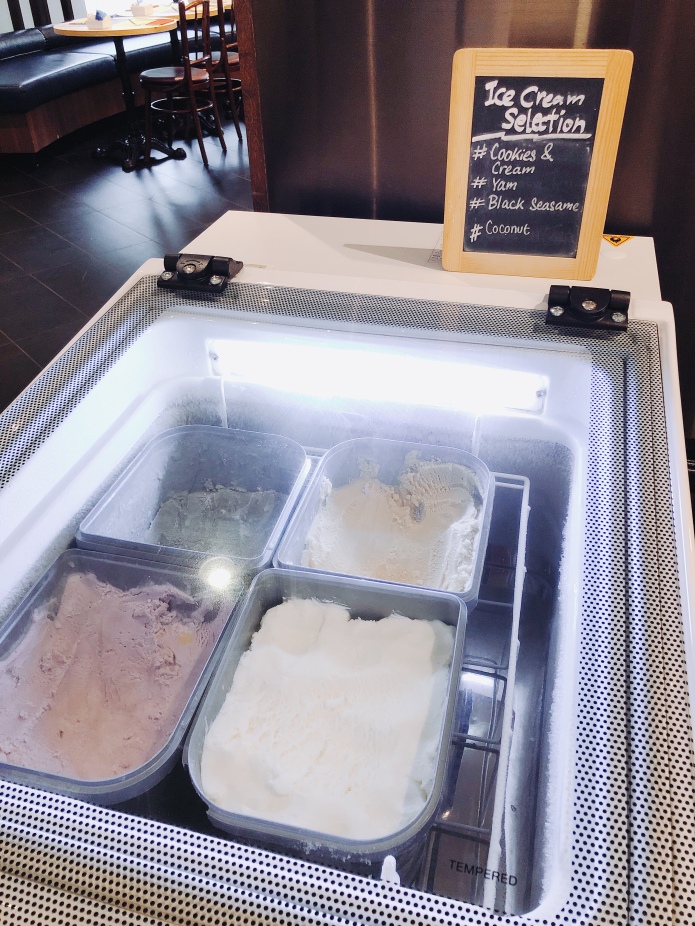 The ice cream corner was quite good though! Loved the black sesame and coconut ice cream.

One thing I really appreciated was that they refilled their dishes very promptly. You know how there are buffets that take forever to refill their dishes, especially oysters, or limit each serving to a couple of oysters per person? Straits Cafe certainly doesn’t do any of that nonsense.

However, the buffet dinner (Mondays to Thursdays) cost $50 before taxes, which I’m not sure is worth the price given its variety. The buffet focuses on local fare, and unless you’re an oyster, crab and durian person, it’s going to be hard to make your money’s worth.

Before I end, I would like to state my almost horrible experience with Straits Cafe. The restaurant had initially  arranged for a hard-to-maneuver, hard-to-eat-from corner sofa seat for my party of 4.

Since I was early, and seeing that the whole place was still empty, I requested to be seated at a proper table instead. To my amusement, the staff told me that everyone had also requested for a proper table and therefore they couldn’t move me to a proper table.

My first reaction was like whut is this guy talking about. You mean everyone who made a reservation called in to dictate that they didn’t want a sofa seat? (Or it so happens that everyone was eating with an elderly or toddler and remembered to tell the restaurant so they could make “special arrangements” which is of course is just a normal table seating). By the way there’s only ONE sofa seat in the restaurant so everyone knew to avoid that?

So after a couple of minutes of reasoning with him, he finally gave me a proper table while still insisting that I should have called in to state my demand of not wanting an inconvenienced seat (erm.. do you heard how ridiculous this is?). By the end of my meal which was two hours later, I still noticed empty tables around.

So guys, if you ever dine at Straits Cafe, make sure to tell them that you do not want the sofa seat.

❤️🖤🖤 Hawkers’ Street at ION Orchard is a pretty good concept — famous hawker food housed in one location, right in the heart of town. If you’ve always wanted to […]
Hawkers’ Street, ION Orchard

❤️❤️❤️ Hey! Yakiniku is a yakiniku restaurant serving affordable and quality set meals that won’t break the bank. Located at one end of Bugis Junction just opposite the National Library, […]
Hey! Yakiniku, Bugis Junction
Loading Comments...
%d bloggers like this: