Bangkok in 5 Days and 4 Nights

I recently went on a 5D4N trip to Bangkok (BKK), Thailand and thought that I should pen down my itinerary here with some tips for you guys, as well as recommend some food places.

I arrived at BKK on Saturday night, about 730pm. As soon as I cleared immigration and bought my data sim card (300baht for 8 days, 4G speed capped at 2.5GB), I booked an Uber to my hotel. I stayed at Arte Hotel, located within walking distance to Terminal 21. My fare there cost 300baht, $13 SGD.

Tip: Use Uber/Grab to get around BKK. That way, you wouldn’t need to bargain with taxi/ tuk tuk drivers, and you can be sure that your Uber driver would know where to alight you. Plus, you won’t have weird charges after your ride (I took taxi once and the driver wanted to charge me an additional 50baht for going a “faster” way). On average, the difference in price as compared to taking a metered taxi isn’t that much.

After checking in, I headed out and took the metro from Sukhumvit to Thailand Cultural Centre. Followed the crowd and cut through Esplanade Shopping Mall before exiting via the carpark which would eventually lead me to Rot Fai Ratchada.

The best food I found at Rot Fai Ratchada was river prawns in a bag! I went for the river prawns combo because river prawns in Thailand are huge!!! Not like the tiny ones you get when you prawn in Singapore for an expensive $36 for 3 hours. I picked the original non spicy flavour but I’m not sure if they mixed up my order or the original taste was as such because it sure was spicy! Taste wise it had a strong hint of tom yam amidst other herbs. Yums.

End off your meal and walk with a thirst quenching (and pretty looking) ice blended watermelon for 60baht ($2.50 SGD).

Talad Rot Fai Ratchada is open from Thursdays to Sundays, 5pm to 1am.

Started the day at the famous Chatuchak Market, which opens at around 9am. I would suggest having breakfast elsewhere before heading to Chatuchak, because the food at Chatuchak is not exactly cheap and good. Plus, no rush to get to the market early because some of the shops won’t be fully operational till about 11am.
Tip: Bring shades. And a battery operated fan. You probably won’t have the stamina to comb through the entire market systematically, so just make the best out of it. Also, if you see something that you like, just get it. Some shops at Chatuchak now are actually quite affordable.

You would still be full from breakfast and Chatuchak snacks (be sure to eat their coconut ice cream with peanuts!), so head back to your hotel to rest and relax before starting your evening again.

Tip: Bring your swimming gear along. Find a hotel with a swimming pool. Have fun!

Left my hotel at about 4pm and took the BTS from Asok to Siam. My main aim there was to eat beef noodles at Siam Paragon and shop at Siam Square One. 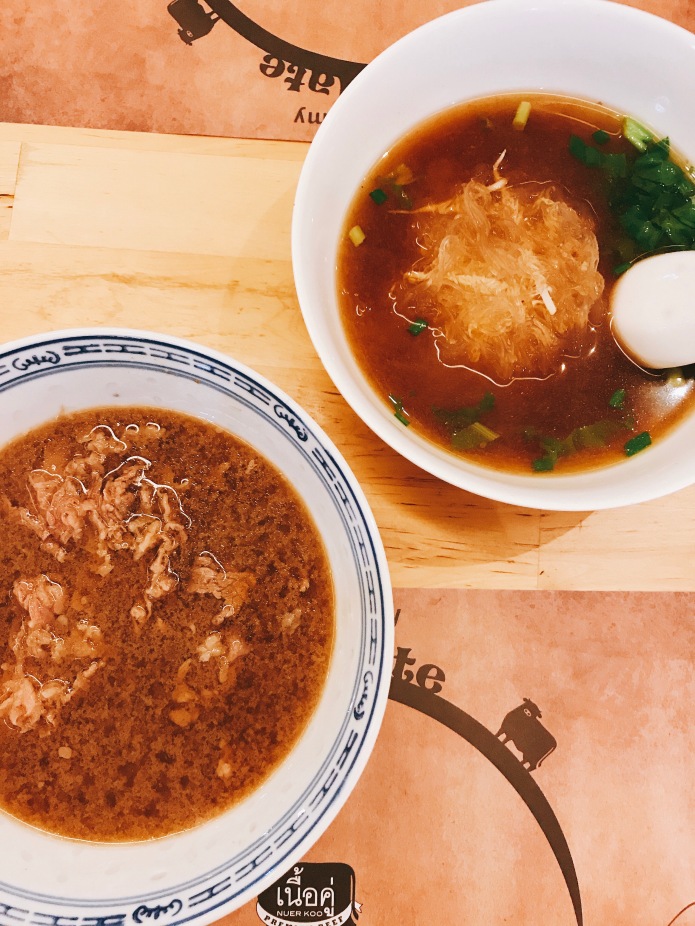 Introducing Nuer Koo! It’s basically sliced beef in a simmered beef broth that’s not any like I’ve tried before. These beef noodles do not come cheap, ranging from 180baht to 950baht ($8 to $38 SGD) for various types including rib eye and Kobe beef. The beef doesn’t come with staple so you’ll have to top up another 25baht for noodles. I tried the Australian Wagyu and it was so good. Trust me, it was so good that I’m having cravings for it right now in Singapore. Grrrr.

I wanted to try the desserts at After You because  of all the rave, but decided to go for something mango because, Thailand. Googled around and they pointed me to Mango Tango along Siam Square. 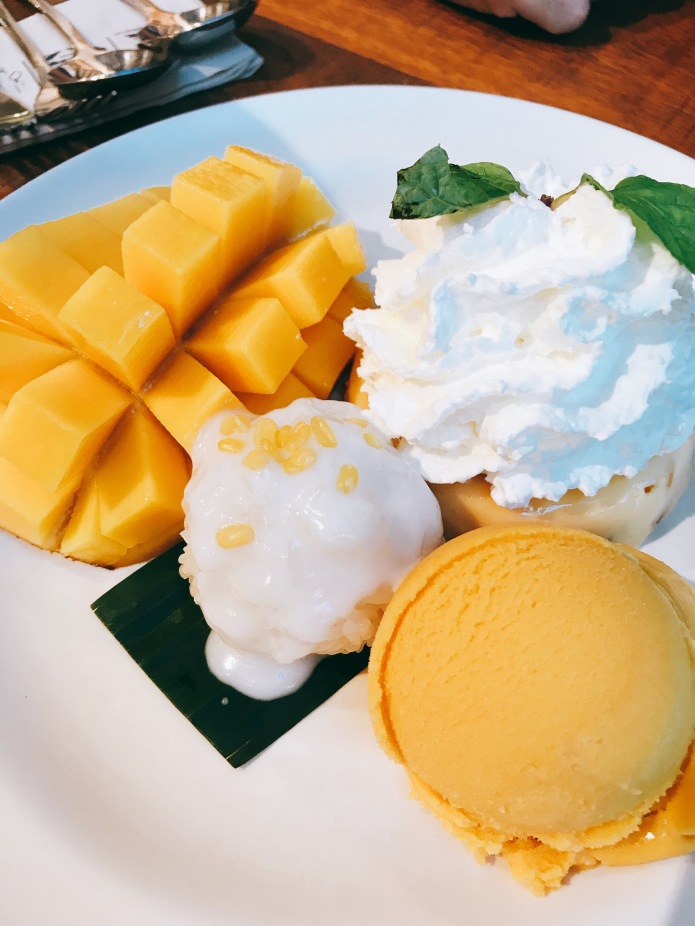 Looks totally Instagram worthy, but sigh it’s not as delicious as it looks. The mango pudding was so disappointing. I liked the mango sorbet though, it had a thick, solid texture.

After my food I walked around Siam Square hoping to bag some shopping deals but unfortunately nothing caught my eye. So I headed to my dinner venue instead.

My friend told me that this place had a long history and I didn’t believe him at first but after trying the food here, I second and triple him. A must try for this place is their Baked Pineapple Rice.

To digest dinner quicker, I walked all the way from Siam to Talad Neon which is behind Platinum Fashion Mall. It was at least a 30 minute walk.

At Talad Neon, I didn’t eat or buy much stuff. The place was similar to Rot Fai, so I got bored quickly after awhile. I did come across this sparkly drink.

Ending off the night, I went for a Thai massage at Healthland Asok which was near my hotel. It’s supposedly a popular place for  Singaporeans as well. A 2 hour massage cost 600baht ($26 SGD), which is quite reasonable given the better condition of this place. I tipped my masseuse 20baht, because she was standing there bidding me goodbye so I paiseh. I’m not sure if such a practice is still commonplace these days.

The wonton mee and braised pork rice isn’t cheap at 100baht ($5 SGD) each, which probably isn’t worth the price according to BKK’s standards, but still worth a try if haven’t done so. Chilli is a must for your wonton mee. Don’t say that you’ve tried their wonton mee until you’ve eaten it with chilli. The braised pork rice was also very pleasant; rather flavourful but don’t ever scrutinise their preparations haha.

The feel of Platinum Fashion Mall is still the same, but majority of the clothes here sell for 250baht and above even at “bulk” price. That’s like $12 SGD. Still cheaper compared to the clothes in Singapore, but not as cheap as a couple of years ago where you could still get a decent skirt and dress for 150baht. And mind you, not like there was an improvement in quality of the clothes.

After a lot of walking, I headed back to my hotel where I went for a swim again!

Tip: Don’t bother getting an Uber from Platinum Fashion Mall. The roads there are too congested for any Uber car to reach you within 10minutes.

After a good rest at my hotel, I walked over to Terminal 21 where it’s mainly window shopping. Each level is of a different theme, so you have London, Paris, Japan, Hollywood etc. Really cool but again, nothing much to be bought from this mall. I was more excited over the food variety in Terminal 21 hehe. Terminal 21 has many restaurants like Coco Ichibanya, MK Steamboat, Tony Roma’s, Ootoya, Swensens but I think the best place to dine at is the food court, also known as Pier 21.

The prices at Pier 21 are so affordable (average about 50baht, $2.50 SGD)! The natural instinct is to over order, but please control yourself. I tried the Pad Thai, Papaya Salad, Tom Yam Soup, Braised Pork Rice and Mango Sticky Rice. Of all the dishes here, the weakest was the Tom Yam Soup. You can skip it. 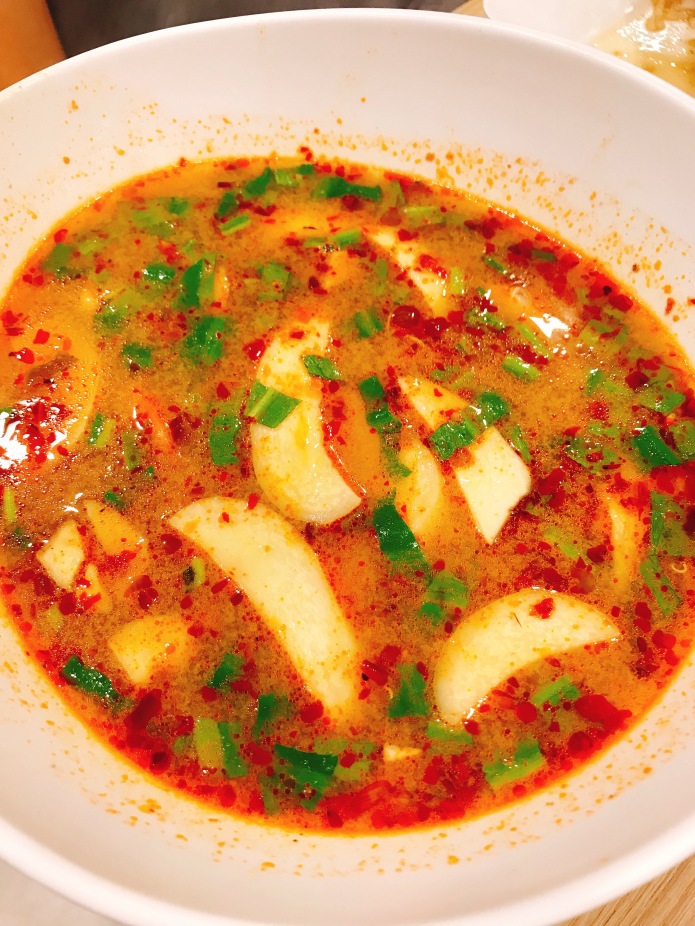 It sounds really crazy but after all these feasting at Pier 21, I headed to Chinatown to eat seafood dinner! It’s so strange, somehow I just could eat meals after meals after meals. Anyway, Chinatown is some distance away from Terminal 21 so there’s time to disgest the food in your tummy.

Tip: Take an Uber to Chinatown. Being such a far place, few taxis will send you there on a meter.

I dined at this place called T & K Seafood. It’s super chaotic on the ground level, so you’ll be quickly whisked away to the upper floors. Rule of thumb — minimally order crab, steamed fish and clams or mussels.

The glass noodles were soooo flavourful!! Reminds me of japchae, the Korean glass noodles. Also has the wok hei taste which makes it super yummy.

After dinner I headed next door for bird’s nest at Nam Sing (strange, seems like everyone visits BKK’s Chinatown for three things only: seafood, bird’s nest and shark’s fin). Again, contrary to perception that food in BKK is cheap, my bird’s nest cost 300baht (about $14 SGD). It’s nice though, and the toppings are very generous.

Having done all my shopping the past 3 days, I dedicated day 4 to cafes. By my friend’s repeated recommendation, I headed to Roast at EmQuartier Helix Building B. Because I was early, I got the sit by the full length windows and you know what? Best view ever. 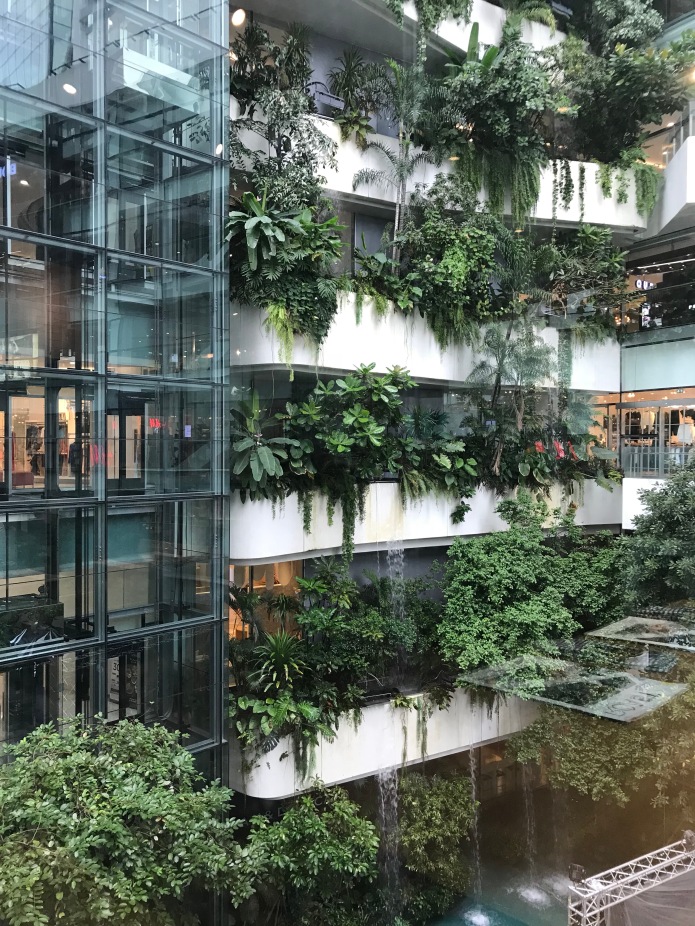 The pasta was impressive. It’s freshly handmade, so the Tagliatelle strands are of varying sizes. It was also cooked al dante, and the toppings are generous. The creamy sauce can get a little jelat towards the end though.

The Slow Roasted Fried Chicken was by far the best roast chicken I’ve ever eaten in a cafe. Having marinated in buttermilk and homemade hot sauce for 48 hours, the flavour of the chicken really hit the spot for me. The chicken comes with their special chilli in a separate bottle, but I didn’t think it was necessary.

After my meal I was too full to do anything else. Not even have desserts! This was something I regretted. Should have eaten lesser so that I have space for desserts. Tried to walk off the heavy feeling but I just couldn’t, so I ended up going back to my hotel to swim (again!!!).

Headed out to Asiatique for the evening (because a lot of websites hailed Asiatique as one of the best night markets in BKK) and I must tell you here and now that you should skip this night market entirely. It was a total waste of my time. The shopping was mediocre and the food was unmemorable. Plus, the prices of everything was on the high side. To add on, getting here is not easy. You have to take the BTS to Saphan Taksin (44baht from Asok, $2 SGD) and then queue up for a free ferry which can take awhile because the ferry runs once every 15 minutes and if you’re going during peak hours, good luck.

Left within a couple of hours and since it’s my last night in BKK, I went for a full body massage at Healthland Asok again. Shiok.

Day 5 – Back to Singapore

My flight was at 12noon, so I checked out of the hotel at 930am and took Uber to the airport. The journey took about half an hour, and the fare was 375baht (inclusive of 25baht toll free, $15SGD).

At Suvarnabhumi Airport there are shops selling food and souvenirs. I grabbed a quick meal at Ippudo Express before getting onto my flight and it’s home sweet home Singapore!

Overall I feel that the three essential places to shop and eat in BKK are: Rot Fai Ratchada (one night market is enough, trust me), Platinum Fashion Mall, and Chatuchak Market. Shopping wise it was disappointing for me, while food wise I’m glad I found some really good ones﻿.

All prices in SGD in this post are an approximate and not to be taken as is.